We are t-minus 1 week and counting from the start of the highly anticipated 2021 Disc Golf Pro Tour. After a year of cancelled events the 2021 season looks to be a year full of fun and excitement. Paul McBeth comes into the season with 5 PDGA Championships, a number 1 world ranking and a brand new McLaren as he hopes to keep some of the young guns like Eagle McMahon and Kevin Jones at bay. Simon Lizotte, who had an atypically quiet season plagued by elbow injuries, has already had to withdraw from the first two months of scheduled events. Here is to hoping that he can make a full and speedy recovery. We're looking forward to seeing those "Simon lines" soon!

There will be 21 events, throughout the year, that will fill out the Disc Golf Pro Tour and Professional Disc Golfers Association calendar that will come to a culmination at the Disc Golf Pro Tour Championship the weekend of October 14th-17th in Charlotte, North Carolina. The festivities begin with a stop in Las Vegas for the Las Vegas Challenge February 25th-28th. Nate Sexton will look to defend his 2020 win there while the likes of Ricky Wysocki and Calvin Heimburg will look to improve upon their respective top 5 finishes.

After Las Vegas we follow the Tour to their next stop in Waco, Texas, March 12th-14th, for the Waco Open. The 2020 Waco Open saw Brodie Smith play in his first A tier event if his young career. Despite not having any strong showings in A tier's last season, Brodie saw his rating climb to 999 by the end of the year and should be one of the most exciting players to watch this year. From Waco the Tour takes a short jaunt to Tyler, Texas for the first National Tour stop of the year for the Texas State Disc Golf Championship presented by Latitude 64. After that is the Jonesboro Open, taking place in Jonesboro, Arkansas the 16th to 18th of April followed by the newly renamed Dynamic Discs Open in Emporia, Kansas from April 28th to May 1st.

The summer stretch of the Tour begins May 14th-16th in California for the newly renamed OTB Open. Previously known as the San Francisco Open, the OTB Open moves out of San Francisco this year to a new course in Stockton, California 90 minutes to the East. The Master's Cup in Santa Cruz returns May 28th-30th after being postponed last year due to COVID. Following the Master's Cup the Tour takes a short drive north to Oregon for the Portland Open, June 4th-6th, and the Beaver State Fling, June 11th-13th. Following the West Coast swing is a trip across the Atlantic to Norway for the PCS Sula Open. This newly formed tournament was created by combining two previous separate events, the aptly named PCS Tournament and Sula Tournament, into one 3 day event at 2 world class DiscGolfParks in Vasset DiskGolfPark and Øverås DiskGolfPark. Following Norway we come back to the states to Michigan for the Great Lakes Open, July 23rd-25th, and Minnesota for the The Preserve Championship, July 30th-August 1st. The annual Ledgestone Insurance Open is scheduled for August 5th-8th this year as Sockibomb looks to defend his win there in a COVID shortened 2020.

From the Ledgestone, the Tour makes a stop in Kentucky for the Idlewild Open taking place August 13th-15th and then moves on to Delaware August 27th-29th for the Delaware Disc Golf Challenge. The always highly anticipated MVP Open at Maple Hill will see Paul McBeth try to make it 3 wins in a row at this event. The likes of Chris Dickerson, Nikko Locastro and James Conrad, who will be playing his first MVP Open as a sponsored player by the title sponsor, will look to dethrone him in the September 3rd-5th tournament. From Leicester, Massachusetts, the tour goes to Vermont for the Green Mountain Championship the following weekend. To round out the regular season the Tour stops in Nashville, Tennessee the last weekend in September for the Music City Open where in 2020 Alden Harris held off Chris Dickerson to take down his first ever A tier event.

Last years Disc Golf Pro Tour Championship was a game changer for both the tournament winners and the Tour, as a whole. Kevin Jones and Hailey King will look to defend their 2020 Tour titles at Hornets Nest in Charlotte, North Carolina October 14th-17th. ESPN2 broadcast the final round of the 2020 event in November that pitted Paige Pierce, Hailey King, Catrina Allen and Lisa Fajkus in the FPO division and Chris Dickerson, Kevin Jones, Austin Hannum and Calvin Heimburg in the MPO division. Kevin Jones and Chris Dickerson battled in out until the last hole when Dickerson found his tee shot in the woods and had trouble getting out. Kevin Jones finished it off with a par, winning by a stroke to bag the $20,000 grand prize. In the female division, it was a 3 horse race until Catrina Allen shot a quadruple bogey on the 17th. Paige Pierce and Hailey King battled it out beyond regulation as Hailey pulled out the win on the 2nd hole of a playoff. We can only hope that this years Championship can give us as much drama as last season's. The 2020 season was not only shorted by the pandemic but saw numerous events rescheduled and relocated. Despite this the sport and Tour saw an exponential explosion of interest as people found new ways to spend their time and money. As the new season rolls around the 2021 season looks to be the biggest one, yet. I don't know about you but I am looking forward to see what it has in store for us. It should be an exciting one! 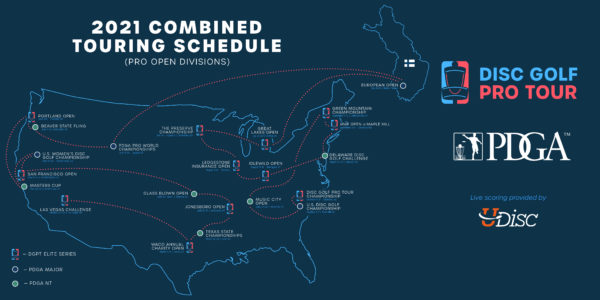 Back to Tour Updates